A walk down Pitt Street


Pitt Street, or Jalan Masjid Kapitan Keling, is one of the four major streets in the Original ‘Francis Light Grid’ It is said that the choice of name for this street came as an afterthought. After naming the first street of his settlement after himself that is ‘Light Street’, he named the town after the British monarch King George III. Light realised that he may have offended the prime minister for not naming anything after him. Hence, he decided to name Pitt Street after then Prime Minister, William Pitt the Younger. I wonder why the name ‘the Younger’? Probably it was because he became the youngest Prime Minister in 1783 at the age of 24. 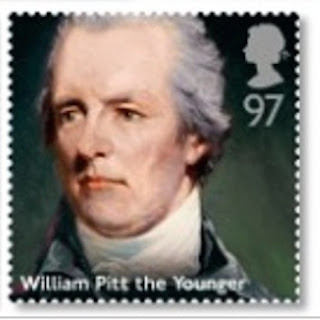 Pitt Street has a lot of fond memories for me, as this was the street where I first stayed on arriving in Penang. This is also the street where the famous Rawthers stayed and ran their businesses.
Pitt Street wears a European character. It was here, where the earliest British officers had their homes. By the middle part of the 18th century, as the Europeans moved into the suburbs (to North Beach and then later on to Western Road), the properties along the coast were bought over by wealthy Chinese tycoons. 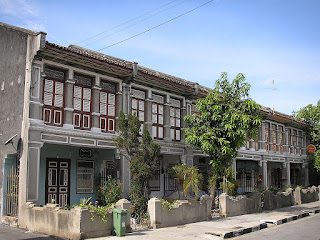 Streets within the grid were pertinently named to reflect the period during which they were built. Names such as Market Street, King Street, Queen Street and Penang Street are still used today. All these streets today form the heart of Little India. Stevedores from south India lived along parts of King Street, which the Tamils called "Padavukara Theru" or "the Street of Boatmen". Market Street, which now forms the heart of the Indian enclave, was called "Kadai Theru" or "Street of Shops". All races shared Pitt Street, as this is evident in the places of worship found along the road.  Lining up along this harmonious street, and all within a stone throw away from each other, are the St George's Anglican Church, Goddess of Mercy Temple, the Sri Mahamariamman Temple and the pride of the Indian Muslims- Kapitan Keling Mosque. This is a silent reminder of the religious harmony that is sacred to all Penang folks.
These great landmarks on Pitt Street stood in the very heart of Penang’s infamous Riots of 1867. The Residence and other surrounding clan houses were intricately connected through a series of underground tunnels and hidden passages in the good old days of spice trade.
Chinese immigrants to Penang brought their traditions with them, including secret societies, which provided mutual aid and protection for the Chinese community. As the societies grew in wealth and power, gang warfare and extortion rackets became commonplace. Matters came to a head in the Penang Riots of 1867: for nine days Georgetown was shaken by fighting between the Tua Peh Kong society, supported by the Malay Red Flag, and the Ghee Hin, allied with the Malay White Flag.  Police intervention resulted in a temporary truce, but on August 1, 1867, the headman of the Tua Peh Kong falsely charged the Ghee Hin and White Flag societies with stealing cloth belonging to Tua Peh Kong dyers. All hell broke loose, and fighting raged around Armenian, Church and Chulia streets. Barricades were erected around the Khoo Kongsi, where some of the fiercest skirmishes occurred. The fighting was eventually quelled by- sepoys. (Indian troops) brought in from Singapore by the Governor-General, but by then hundreds had been killed and scores of houses burned.

Let us forget those ugly scars and start our historical journey along Jalan Masjid Kapitan Keling, (Pitt Street) from the Esplanade end.  As we enter, just opposite the Court House is St George's Anglican Church.

With the help of The East India Company, this church was built in 1816 using convict labour during Colonel J. A. Bannerman's term as British Governor of Penang. The inspiration behind the formation of St George church, however, was credited to Rev.
Robert Sparke Hutchings, a well known educationist and Robert Smith, an engineer and landscape artist. Rev. Hutchings contributions towards the development of Penang from an educational perspective are significant.  He founded the Penang Free School. (I am an old Free and was there during the last British headmaster-. Mr. J. M. B. Hughes).
Rev. Hutchings, compiled and wrote what were considered the first books on Malay grammar, in addition to several elementary textbooks and a dictionary mainly for school use.  The first significant event, which took place in the church soon after its completion, was the wedding of a W. E. Philips to Janet, the daughter of Governor Col. Bannerman in 1818.
As we leave the church, we will enter the working-class Chinese precinct. This is anchored by the Kuan Yin Teng Temple, which once had an uninterrupted view of the sea down China Street. It was a predominantly Chinese enclave. 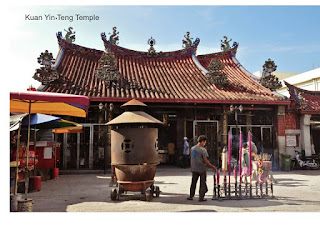 You will notice that the space after the Kuan Yin Temple broadens. In the old days, there used to be a police station here, on the site where today you can see kiosks selling flowers.
Another great landmark along this road is a Hindu Temple built in 1833. The Sri Mahamariamman Temple is the oldest Hindu temple in Malaysia, and features sculptures of gods and goddesses over its main entrance and facade. It is also known as Mariamman Temple or Queen Street Indian Temple. 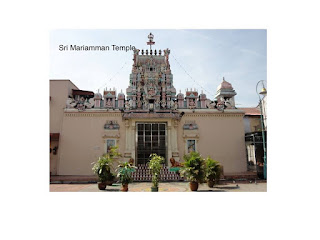 Continuing down Pitt Street, next junction is with Chulia Street, a thoroughfare populated mostly by communities from the Indian subcontinent.
In the old days, the junction was known as Simpang Lelong in Malay, or Ellam Muchanthi in Tamil, both meaning "auctioneer's junction," for auctions were carried out under the Neem trees. So, no worry for toothbrushes to the Indians whose tradition was using the branches of Neem trees as toothbrushes.

Upon crossing Chulia Street, the character of Pitt Street changes again. On the left side are rows of Muslim jewellery shops almost all on buildings belonging to the endowment board, while on the right is their main place of worship, the Kapitan Keling Mosque. This is the Indian Muslim part of town. 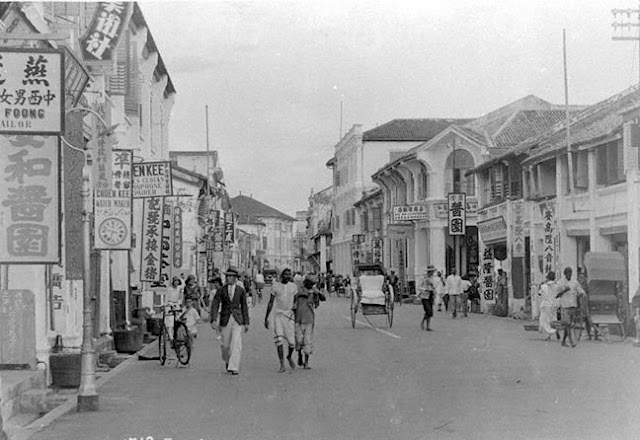 The Kapitan Keling Mosque was named after "Captain Kling", the headman of the South Indian community, who was appointed by the British administration in 1801. The first mosque on the site, the predecessor of the present Kapitan Keling Mosque, was a small "Chulier Mosque" which appeared on a map of 1798.

According to the history recorded in a report on Muslim trusts in 1904. "In the early days of this Settlement, the Havildars, Jemadars and Sepoys who constituted the native section of the East India Company's Troops stationed in Penang, cleared a piece of land and erected an attap mosque on a portion of it and used another part as a burial ground. Oral tradition names the founder of this attap mosque as Major Nador Khan, an East Indian Company sepoy.
The grant of the land given by Leith stipulated that the land "which have been originally given for religious purposes is not to be sold or transferred but to revert to the Honourable Company should it cease to be used for the purposes intended."  Cauder Mydin Merican brought builders and bricks from India to erect the mosque. He took the matter in hand and collected subscriptions to build the mosque and also to upkeep the Mosque. The Captain Kling was thus regarded as the founder of the mosque. Probably, the sermons and other matters were conducted in Tamil and so the Acehnese community under the leadership of the Arab decided to build the Masjid Melayu at Acheen Street in 1808.  Cauder Mydin Merican was a Maraikkayar like the late ex Indian President - A. P. J. Abdul Kalam. 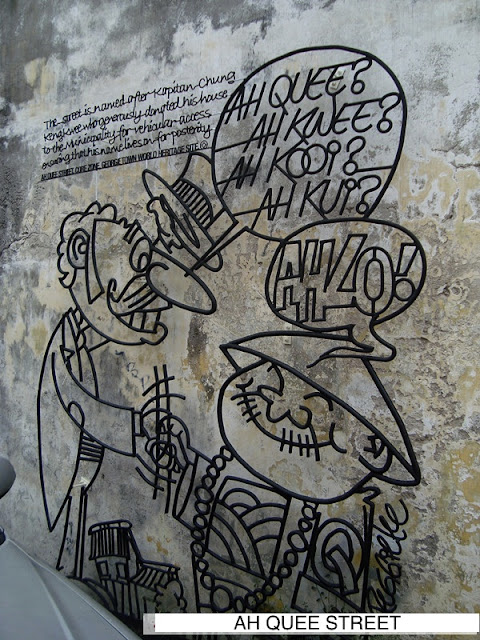 A walking distance from Masjid Kapitan Keling is a small road branching from Pitt Street called Ah Quee Street. Here, a largely forgotten piece of Muslim heritage is the Madrasah Hamid Arabi, or by its full name Al-Madrasah Al-Mahmoodiyah Al-Arabia. It is an old Muslim religious school, which is now in a dilapidated state.

The school was once a leading Islamic religious school and boarding house for Muslim students.
The right side of Pitt Street, at the junction with Buckingham Street and Kampung Kolam, was once known as Tua Chooi T'ee in Hokkien, meaning "big water tank". This refers to the water tank used by the Muslim community for ablution.
Kampung Kolam, the next junction after Buckingham Street from Pitt Street got its name from the village that was once located there. The village got its name from the tank, or kolam, in front of the residence of Cauder Mydin Merican, the founder of the Kapitan Keling Mosque. The villagers were mostly Indian Muslims who can trace their origin from South Indian districts such as Tanjore.
The junction of Armenian Street signals another character change for Pitt Street. This is where Pitt Street ends, and the street following is Cannon Street, named to commemorate the cannons fired during the Penang Riots of 1867. 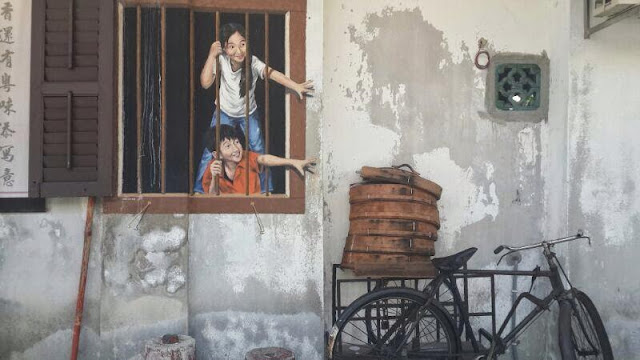 The End
Posted by borhancikgu@gmail.com at 07:41